That thingie in  your sink that grinds up food is called a garburator, up in Canada.  Apparently I have no idea how to spell what we call it down here so maybe I’ll just go with “thingie”.

When the thingie doesn’t work and gets all rusted and clogs up, there’s a cascade of ill effects.  The sink backs up, the dishwasher doesn’t drain well and the dishes don’t get quite clean, and so on…

So when I had electrical work done some time ago and it somehow messed up the circuit to my sink.  So the thingie didn’t work.  And since it took me a while to get that fixed, the thingie had managed to rust to a solid block of dysfunction by the time power was restored.  I considered paying the nice people at BigBoxHardwareStore to come put in a new one and then I looked online and discovered how ridiculously simple it is.  And by doing it myself, I can spend the installation budget on something else, right?  I Saved Money!

Screwdriver for the dishwasher hookup and the electrical access on the unit, and needle-nose pliers for manipulating wires:

(Note the water damage inside the sink and on the nearby floor tile.  Now that the unit itself is fixed, I can repair those and expect the repair to last awhile…)

So how do you install a garburator?  First step is to simply remove the old one.  I didn’t take any photos, but the process simply involves:

At this point your old unit should be fully detached so set it aside.  You have a tabula rasa to install your new unit: 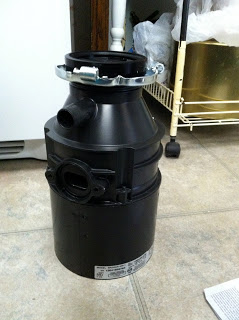 Now, the first step would normally be to install the drain part in the sink itself.  But since I was replacing with the same brand and the existing drain is in good shape, I elected to not bother to replace it.

So first you want to prep the unit a little bit.

(no picture) If you plan to use the dishwasher, you need to knock out a little plug of plastic blocking the dishwasher drain intake.  Otherwise you’ll get the whole thing installed, proudly run the dishwasher – and then come back to find your dishwasher full of nasty, dirty water that had no place to run.  This is apparently confusing to the dishwasher which takes a bit of fussing to remember to drain itself and restart its rinse cycle after the problem is fixed.  Don’t ask me how I know this.  Another mysterious piece of knowledge:  It’s possible to come back and pop that piece of plastic out using a hammer and screwdriver after the unit is installed and in place, though I’m sure the manufacturer doesn’t recommend this approach.  Let’s pretend that I didn’t take a picture of this step because it’s a two-handed process so I didn’t have a free hand to hold my camera…

Attach the drain pipe piece:  There’s a L-shaped piece of pipe, a rubber gasket, and a metal piece with two screws to hold the pipe against the gasket.  Easy-peasy: 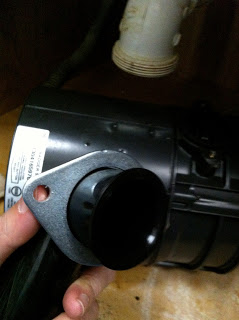 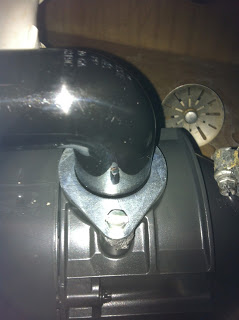 Electrical access is on the bottom of the unit, and the hookups are protected by a little metal plate held on by a single screw:

You’re supposed to pass your power line into the round hole to the side, which is configured to accept a wiring connector/clamp.  As I didn’t have one on hand, and the previous unit didn’t have one I could salvage, I’ll have to come fix that later.  Once the wire is dunked through, push the white and black wires aside and hook up the household ground to the screw at the side of the unit: 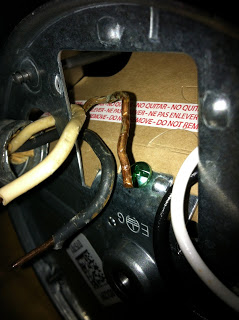 Notice that there’s a weird piece of cardboard in there with a strip of tape saying “do not remove” in a bunch of languages.  I assumed they wanted me to leave that in there.

Then it’s a simple matching game:  white to white, black to black, and secure with wire nuts. 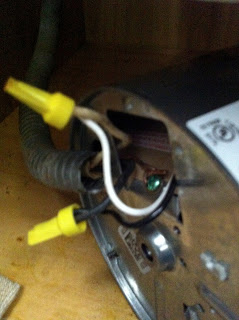 Then because I am a bit inclined to over-engineer things, I secure the wires/nuts with electrical tape for extra safety.

Shove it all back inside the space, re-attach the metal plate, and you’re ready to hook up your unit!  The only hard part about installing the thing is that it’s a bit heavy and you have to hold it out and lift it up at arms length – there’s no real opportunity to get right up under it so you have to have a little strength to make it go in right.  But it’s just a matter of lining up the unit with the opening (there’s a big rubber gasket seal that’s actually helpful for being sure you’re in the right place) and sliding some metal tabs over a metal lip, then turning to tighten.  Hard to show in pictures; here it is installed:

Then hook up the drainpipe.  The dishwasher line fits over the tube and tightens on with a band as you see in the picture above.  For the main drain line, you slide on a connector and a gasket,

And then just screw those onto your u-trap infeed.  With the u-trap connected, the job is finished.

Recommend filling the sink with water and then draining it all at once through the thing to see if you’ve got any leaks, then turn on your power and do a little victory dance when you see it works!