The home desktop died and hasn’t yet been replaced, which has made it inconvenient to post.

But haven’t been entirely idle even though the summer heat has encouraged me to spend a lot of time just trying to hibernate.

Got in a bit of fall gardening yesterday.  Am still really trying to teach myself to do this effectively; my childhood gardening experiences only take me so far in learning what one has to do to effectively grow fruits and veggies here in Houston.

So.  The first set of research has been around the idea of crop rotations.  Seems like everything is vulnerable to something – tomato plants get fungus, squash or cucumbers succumb to borers, slugs and snails munch the cruciferous veggies and lettuce.  Crop rotation is supposed to help reduce the problems with the tomatoes anyway.

Surfing google tells me that people use rotations that cover three or four years.  The idea is that by three or four years, soil fungus and bug eggs/larvae have probably died off, leaving soil that won’t just attack and eat up that particular type of plant.  Problem is, most sources do not assume the ability to grow two crops (spring and fall) every year.  So I have to think it through a bit better.

SO after quite a bit of reading about what different things need and shuffling ideas around, I am ready to try a four-year cycle that entails pairs of plant families, with spring and fall coverage.  Or rather, a three-year cycle with a rest and recharging in the fourth year.

In this post I’ll outline the basic rotation; then plan future posts to talk in more detail about each grouping and what I plan to try with each.  The tentative plan assumes I have 16 boxes but of course could expand or shrink this number; just needs to be a multiple of 4.  For my yard plan, I’ve mostly gone with small planting beds – 2×2 raised wood beds, or larger-sized plastic tubs with the bottoms cut out.  So four of my little boxes is like half of one of the standard 4×8 raised beds you see on a lot of plans.

So here’s the mighty rotation, in picture form:

And if that doesn’t come through clearly here’s the brief list:

1.  In the first year of the rotation, I plan to pair nightshades (tomato, pepper, eggplant, pepper, etc) with the beet and spinach family, and also slip in alliums (garlic, onion, chives) and basil as companion plants.  Lots of additional detail and planning to do here, but tomato fungus is one of the primary reasons I’ve started this whole rotation idea.

2.  In the second year, those boxes would go over to some mix of brassicas (kale, kohlrabi, broccoli, radish, etc) and legumes (beans and sugar snap peas).

3.  For year three, those boxes would now be filled with some combination of cucurbits (squash, cucumbers) and for the cooler weather there’s parsley and carrots (who knew those were in the same family?) and lettuces.

4.  And, the fourth year is a chance to plant odd-ball families like sweet potatoes (did you know they’re actually related to morning glories), and give the boxes at least one season of rest during which I will add a bunch of compost to raise up the soil levels in the box, maybe plant a nitrogen-fixing cover crop like alfalfa or clover to prevent weed growth and further enrich the soil.

One thing I like about this plan is that it gives me a good place to KEEP compost to minimize the amount I have sitting around in bins.  Emptying the compost bin into the beds and covering the compost with a pretty cover crop strikes me as a good solution to help handle the influx of yard clippings in spring and leaves in fall. And by using all that material more effectively I hope to lessen my contribution to city landfills, and also decrease my need to purchase soil or compost from the local big box store.

In reality, this plan won’t be a stable “rotation” for many many years.  For one thing, I haven’t half finished my plans for building out the garden design.  And things will also need to shift around to accommodate other changes, like my fruit trees getting bigger.  In the end I expect to have more than 16 little planting boxes available for edibles around the yard, which is a good thing because I’ll need additional boxes to house perennials and herbs (rosemary, lemon grass, thyme, sage, oregano, mint, etc) as well as natural biennials (parsley) and annual veggies that inexplicably decide to become perennial in my yard, like these broccoli plants that have cheerfully ignored two hot summers now including one of the worst droughts we’ve seen in decades: 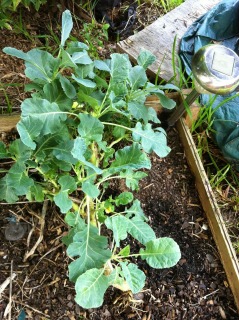 So yeah, that’s the plan.  More ruminating on it later.