After three days, I see the first babies in the pot labelled Bok Choi!  That’s pretty impressive for seeds that were marked to use before 2014.  This is three days after planting, and already there’s signs of pretty high germination rate.

I’ll have to try to transplant them into separate pots, it’ll be interesting to see if they can survive the transplanting process.  I’ll wait until they’re at least starting to develop second leaves.

Since it’s quite hot out still, I may move them back a bit on the patio so they’ll get less direct sun.

Also, I see the first few shreds of oat grass poking their heads up above the soil.  This is a planting for the cats, of course.  I’ll want it to be growing fairly thickly before I put it near them, since there’s some chance they might munch it to the ground.  Or, they might ignore it… I’ve never tried them on it before. 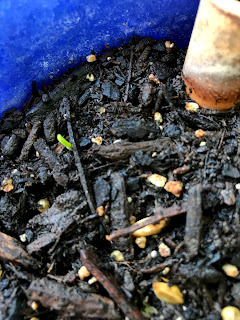